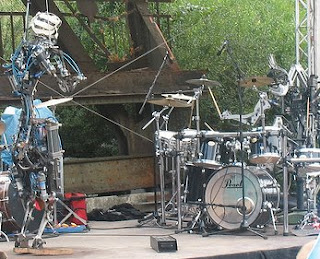 There’s another story from me, now ready at Great Hites. This one is musical in nature, after a fashion, and puts a bit of a spin on the question “What kind of band would you hire if money was no object?”

I’ve been doing quite a lot of behind-the-scenes work on “Some Other Scotland” this week, which should hopefully allow me to forge on with the story with out interruption. I now have a massive chart with all the character details, who they have interacted with, who they will meet in the future (subject to change, of course) and a rough idea of where the next 5 or 6 episodes are heading. Now I just need to get writing.

Finally, I’ve been giving some thought to promotion of the podcast. It has been reasonably low key to date, partly because I wanted to be sure it could work and that people would actually want to listen to the ongoing story. Now that I know this to be the case, I’m ready to start pushing it out a bit more. I have a few ideas so far, so will probably pick the best of them and plan around doing something in line with the 13th episode (i.e. 1/4 of the way through the story).