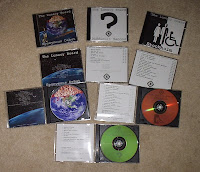 I thought this blog would be very busy over the time we were putting together our 3-album release, but in fact the whole process has been so demanding of time that nothing has been posted here about the albums. So over the next week or so I’ll try and rectify that with a series of posts about the albums, starting with a quick run through of all three before I go into more detail in the next post.

Some artwork problems (of my creation) created a delay in getting this album completed, and there was some to-and-fro between the duplication company and myself to fix it, but once sorted and the CDs arrived I was very pleased with the results. Thanks to Stuart of Gillies Audio for providing a great service and being patient in the face of my errors.

There was a lot of preparation involved to make the ‘Album-in-a-day’ work smoothly, but it paid off and despite a couple of glitches (no sound on the webcast and me falling asleep unexpectedly) I think the results speak for themselves. The finished result is certainly rough around the edges, but we came up with some tracks that I’m really quite proud of that could easily sit beside anything on the first album were they subject to more rehearsal and a less rushed recording process. There are elements of everything from progressive rock, folk and blues through to the avant-garde, music hall and even country all tinged with a bit of a punk spirit.

To mirror the collaborative nature of the first album, we put out a call for guests for this album, resulting in an album with three different theremin players. Gordon Charlton of Beat Frequency and Wilco Botermans added a wide variety of theremin parts, from simple melodic accompaniment to wild and weird sound effects, to six of the nine tracks – thanks go to both of them for taking the time out to join us.

All the music on ‘Stockholm’ is improvised instrumental music, but some of it was recorded as far back as our second rehearsal on fairly basic equipment, so some editing and noise-removal was required to bring those pieces up to a similar sound quality as the more recent recordings. There are a few tracks for which only a few seconds will be audible in the film of Stockholm, but the whole track is included on the CD for the sake of completeness.

Incidentally, the picture above shows the artwork for all three completed albums in almost all its glory. What you don’t see in the picture are the insides of the CD booklets – all three have two pages of liner notes about the songs, including a short extract from the Stockholm script in the case of that album.

And finally, the pre-order offer was due to end on the final release day, but with the delay to ‘Eponymous Debut’ we decided to let it run until we had sent the first batch of discs out. In that time we got a few more orders for all three discs, so I’m going to let the offer run until the end of this month or until the ‘Difficult Second’ discs run out (which won’t not be long as only 50 were made). Once they are gone we’ll not be producing any more, so the only way to get the second album after 31st of August will be by download.

Click HERE to order the 3-disc collection before they’re gone.