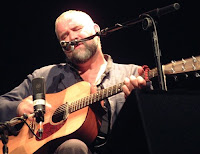 Another month, another rock legend passes on…

It’s been over 20 years since I saw him perform (as a duo with Danny Thompson). It was the first gig I had been to where I had never heard anything by the performer – I normally dip my toes in with an album or two before dragging my carcass along to a live show. This was Cropredy 1987 and I was happy enough to be seeing Fairport, Jethro Tull and Richard Thompson live for the first time that anything else was a bonus. There were several bonuses that year, but John Martyn was the one that really stuck with me.

He’s performed not far from my door a few times recently, but at ridiculous ticket prices, so I haven’t gone, but I’ll never forget that glorious summer night in ’87 when he came so close to outshining Tull (my favourite band at the time).

Free love/free with…
The drunken mouth,
The soft fists,
Of the trip-hop king;
Can’t hear you anymore,
Can’t separate the beast,
From the alleged beauty…

Some Other Scotland - An Alternative Now