This is the news I’ve been waiting to announce – it’s a big undertaking, so we wanted to make sure it would all come together and so far everything is going to plan. As you know, there has been a flurry of recording activity for The Lunacy Board’s first album – plenty of details here in posts over the last few weeks, but what hasn’t been mentioned is that the soundtrack material for the Stockholm film is also completed, having been recorded alongside the main Board album. It made some sort of sense to release these together, so why not make it a trio of substantially different, yet complementary albums? 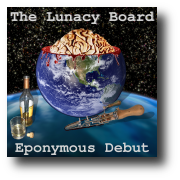 The first album will be released on the 13th of July 2008. This is the one with all the songs, including a couple that have been available to download from www.lunacyboard.com for a while now. It has unexpectedly turned out to be a concept album, or at least to have an underlying theme. Full details are available here, including the ability to pre-order a copy now to be amongst the first to hear it. The second album will be released on the 14th of July 2008. It will be part of the ‘Album-a-Day’ project, being written, recorded and published within a 24 hour period immediately following the release of the first album. Sounds like a suitably daft thing to do, but the idea is to open up the improvisational and collaborational nature of the Board so that anybody watching the live webcast can contribute an idea, as well as keeping us well-and-truly on our toes for the day. I can’t describe what will be on it, as it will all be inspired on the day, but you’re welcome to be a part of it!

No risk with this one – not only will you be able to hear it being constructed, but it will also be available as a free download at the end of the 24 hours. If you really want it on CD, we’re doing a very limited run of signed, numbered copies for anybody who pre-orders both the other albums. Further details are available here. Our instrumental soundtrack album will be released on 15th of July 2008. Featuring almost entirely improvised pieces recorded over the lifespan of the band, which form the soundtrack to the forthcoming animated film “Stockholm”, this album travels from rhythm-led rock numbers via jazzy interludes to sinister ambient soundscapes. Full details, pre-order information and downloadable samples are available here.

It’s been hard work and a lot of fun getting this all together, so get your pre-orders in and put the 13th/14th of July in your diaries to join us at the webcast!